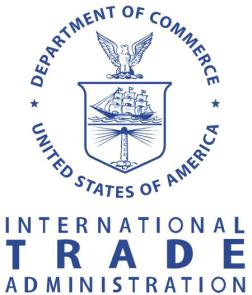 As part of its first major reorganization in more than 30 years, the US Department of Commerce’s International Trade Administration (ITA) has consolidated its four business divisions into three units.

The new units are Global Markets, Industry and Analysis, and Enforcement and Compliance.

The Industry and Analysis (I&A) unit brings together ITA’s industry, trade, and economic experts to help US industries develop and execute international trade and investment policies to increase exports.

And the Enforcement and Compliance unit helps enforce US trade laws and ensure compliance with trade agreements.

The Office of Textiles & Apparel (OTEXA), which oversees apparel and textile trade, supervises the implementation of all textile trade agreements, formulates trade policy, performs research and analysis, compiles industry data, and promotes US trade events, is now part of the new Industry & Analysis division. Key staffs at the OTEXA and their responsibilities can be found HERE.

“Just as companies must change and adapt to ensure they provide cost-effective, high-quality products and services that meet the demands of their clients, so too must government agencies adapt to continuously improve their performance and make the best use of scarce public funds,” explained Francisco Sánchez, undersecretary for international trade.”

Outcomes of many studies suggest that Vietnam would become one of the largest beneficiaries of the Trans-Pacific Partnership (TPP) by substantially expanding its apparel exports to the United States. However, the news report below raises another interesting question to consider: who actually would benefit from the TPP: The local Vietnamese companies or rather the global capitals which invest in Vietnam because of the agreement? This question is important because the answer reflects many debates nowadays about the impact of globalization; particularly, the impact is suggested to be unequally felt by different stakeholders.

The US-led TPP trade pact that will include Vietnam among its signatories is expected to be wrapped up this year, but Vietnamese firms are unsure if they will benefit.

Many are anxious since foreign investors with deep pockets are planning to set up operations in the country to take advantage of the lowering of import taxes by many large economies that will sign up for the trade deal.

For instance, import tariffs in the US, the biggest customer for Vietnam’s leading export, textiles, will be cut from 17-32 percent now to zero.

Many textile and garment companies in the region have already begun to move to Vietnam.

Texhong Corporation of Hong Kong, which set up a dyeing factory in the southern province of Dong Nai in 2006, recently opened another one in the northern province of Quang Ninh with an investment of US$300 million.

One of Hong Kong’s leading textile companies, TAL Apparel, has plans to set up a second textile-dyeing -apparel factory worth hundreds of millions of dollars. It has eight factories worldwide, including one in Vietnam’s northern province of Thai Binh since 2004.

Unisoll Vina, owned by South Korean Hansoll Textile Ltd, has also got a license to build a $50-million factory to make fur and leather clothing and accessories.

According to the Ho Chi Minh City Association of Garment, Textile, Embroidery and Knitting, Japanese companies Toray International and Mitsui, Austria’s Lenzing, and China’s Sunrise are also exploring investment opportunities in the country.

Vietnamese companies are meanwhile trying to enlarge their limited feedstock production capacity to comply with TPP’s regulations on origins – for instance apparel has to be made using yarn and other materials produced in member countries.

The Vietnam National Textile and Garment Group (Vinatex) has opened three yarn factories this year in Hanoi and the central provinces of Ha Tinh and Thua Thien-Hue with an annual capacity of 1,270 tons.

It started work on 11 others in the first half of the year.

Figures from the Vietnam Textile and Apparel Association (Vitas) showed that 70 percent of more than 3,700 textile factories in the country make apparel; only 6 percent produce yarn and 17 percent make cloth while 4 percent dye.

Local producers depend largely on fabric imported from China.

Pham Xuan Hong, deputy chairman of Vitas, said unless the government helps by making cheap loans available for yarn projects, the industry would not benefit from the TPP at all.

The government also needs to zone certain areas for dyeing plants since they are shunned everywhere due to pollution concerns, Hong said.

Mackenzie & Co., a well-known consulting firm, recently released their latest report on the global apparel sourcing map. The report is drafted based on a 2013 summer survey with 29 chief purchasing officers (CPOs) in Europe and the U.S. who were responsible for an annual total sourcing value of $39 billion USD.  According to the report:

First, the global apparel sourcing cost is expected to rise modestly in the next 12 months (1.7% increase on average). Labor cost is tagged as the No.1 driving force of the rising sourcing cost.

Second, companies are sourcing less apparel from China, but they move in a very cautious way. In the meanwhile, Asia is still seen as the world hub for apparel manufacturing & exports in the years to come. Such a pattern reflects the exact criteria for sourcing decisions: a balance of price, quality, capacity, speed and risk.  Particularly, “proximity sourcing” is becoming increasingly important according to the surveyed CPOs. This rule shall also apply to China which has emerged as one of the world’s fastest growing apparel retail markets.

Third, despite the frequent reported corporate social responsibility problems, a combined consideration of labor cost advantage, free trade agreement benefits and capacity make Bangladesh remain the No. 1 hot pot for apparel sourcing for the next 5 years. 83% of surveyed CPOs plans an increase of apparel sourcing from Bangladesh in the years ahead.

Overall, sourcing will continue to be one of the most critical success factors for the global apparel industry.  The survey results reflect a more structural shift in the industry, while the traditional apparel company “caravan journey” becomes more complex. 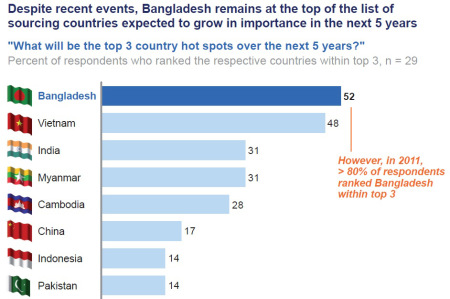 I’m sure  you have all been reading about the current factory protests in Bangladesh, but here are the basics of the current situation. Factory workers of Bangladesh are asking for a $100 monthly minimum wage, as compared to their current $38 monthly wage. The issue is that factory owners are finding it difficult to pay such a dramatic increase on worker’s wages because of their customers (large global brands). The owners are looking to these global brands as the cause of these issues, claiming these large brands are unwilling to pay more for their goods manufactured in Bangladesh. Currently, factories are unable to produce the goods these global brands have ordered due to the protests.

My question is: What’s next not just for Bangladesh, but for the United States? How will our economy be affected if the factory workers, factory owners, and global brands cannot come to a solution relatively soon? What does this mean for us as consumers? Is there anything we can do as consumers? Welcome for any thoughts!

The European Apparel and Textile Federation (EURATEX) on September 26, 2013 hosted a luncheon event on the current US-EU negotiation on the Trans-Atlantic Trade and Investment Partnership (TTIP), particularly the impact of the agreement on the EU textile and apparel sector. According to Mr. Alberto Paccanelli, president of the EURATEX, the United States currently is the EU 2nd largest export market for T&A (over $4.5 billion Euros) and the largest when counting textiles alone. Alberto said that the US market is highly price sensitive and this is one of the reasons why tariffs remain an effective barrier to EU exports. For example, the US still charges a tariff rate as high as 28.2% for imported man-made fiber overcoat and 32% tariff rate for man-made fiber T-shirt. Alberto further added that:

“The EU-US negotiations are the key priority for the EU Textile and Clothing Industry. EURATEX has made a rough assessment on the benefits of the Agreement: it is estimated that exports would register possible annual increases between 2.5% and 3.5% on top of the normal growth rate in Exports due to the Agreement. The EU should strive for duty free access from day one without exceptions and in what concerns Non-Tariff Barriers we should aim at harmonization and mutual recognition. It is also critical to improve access to the Public Procurement Markets and ensure a high level of intellectual property right (IPR) protection and enforcement. The TTIP Agreement should improve business conditions for small and medium-sized enterprises (SMEs), simplifying customs procedures and the costs associated. For the EU Textile and Clothing Industry Rules of Origin are also critical and double transformation should be ensured.”

This is the introductory video of this year’s World Trade Organization (WTO) Public Forum hosted from Oct 1 to Oct 3. The WTO Public Forum is an annual event that provides a platform for public debate across a wide range of WTO issues and trade topics. The Public Forum is also an opportunity for us in the WTO to listen and exchange views with non-government organizations (NGOs), academia, the private sector, with those of you who are increasingly participating in shaping the world’s economic and political environment. This year’s Public Forum looks at the future of trade in an era of innovation and digitalization.

As put it by Michael Froman, the U.S. Trade Representative :” The global marketplace has experienced a sea change. Combining globalization with new technology and with new business models has dramatically accelerated the pace of change and innovation. The flow of data is as important as the movement of goods. Services are an increasing share of value-added manufacturing. And the market is determining standards at an increasingly rapid pace.”