According to the American Apparel and Footwear Association (AAFA), the California Garment Worker Protection Act “does not recognize that brands or buyers may have little to no control over how a particular garment factory employer manages their payroll or enterprise finances.” AAFA explains why this new law in actuality could punish good actors:

The legislation would make responsible brands like Brand Good legally liable to pay for wage claims resulting from Manufacturer Y’s and Brand Bad’s unlawful or irresponsible activity. SB 62 will not deter bad actors like Brand Bad from operating in California’s garment manufacturing industry. Instead, it will penalize responsible companies like Brand Good, even though Brand Good did the right thing. As a result, Brand Good, and other responsible brands, will no longer allow their branded garments to be manufactured in California out of fear that they will acquire additional liabilities over activities they don’t control.”

Discussion question:Based on the video and the readings, what is your view on the California Garment Worker Protection Act? What changes could it bring to the fashion apparel industry and why?

(Disclaimer: All posts on this site are for FASH455 educational and academic research purposes only, and they are nonpolitical and nonpartisan. No blog post intends to either favor or oppose any particular political party/public policy, nor shall be interpreted that way)

Like Loading...
Dr. Marsha Dickson, Irma Ayers Professor, Department of Fashion and Apparel Studies at the University of Delaware discusses her co-founded Better Buying project(http://www.betterbuying.org), a meaningful effort to improve the social responsibility practices in the global apparel industry. The video is produced by Mallory Metzner, reporter of channel 49 of the University of Delaware.

The International Labor Organization (ILO) releases a new study, which looks at how the increasing number of labor provisions in free trade agreements are impacting the world of work. According to the study:

The study finds that there is NO evidence to support the claim that implementation and enforcement of labor standards leads to reduced trade. The findings show that trade agreements, with or without labor provisions, boost trade between members of the agreement to a similar extent. For country-partner pairs that have a trade agreement with labor provisions in force, bilateral trade is estimated to be on average 28 percent greater than what would be expected without such an agreement.

Additionally, the study stresses that interaction among stakeholders, capacity-building and monitoring mechanisms – with the support of social dialogue are critical to achieve positive outcomes in the labor market. In a case study on the Cambodia–US Textile Agreement specifically, the report finds strong firm-level intervention, such as monitoring and compliance, improved wages at the firm level, including a notable reduction of the gender wage gap. In another case study, it is found that capacity-building measures brought to Bangladesh after the Rana Plaza tragedy have resulted in some visible improvements with respect to the number of trade unions, building safety and amendments in labor law in the country.

Appendix: Evolution of labor provisions in US free trade agreements 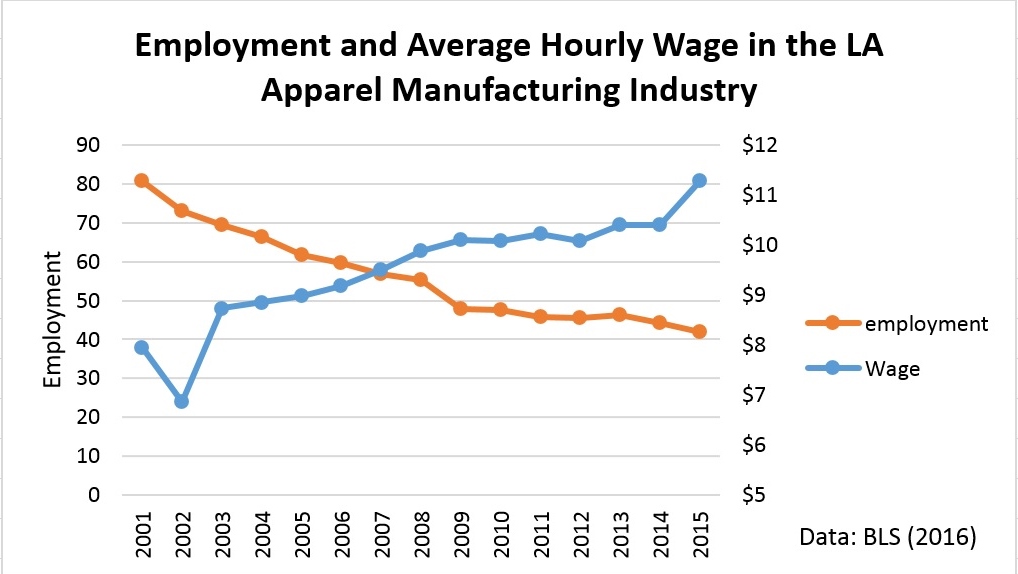 One key argument of the report is: Although cost still matters in apparel sourcing, lower-cost can be achieved through means other than seeking cheap labor. For example:

Engendering end-to-end supply chain efficiency through managing raw materials. Apparel companies may work with their suppliers further down the supply chain to optimize fabric selection, which usually account for as much as 60-70 percent of the total cost of a finished garment (v.s. 30-40 percent of labor cost). Some apparel companies have started to use fewer yarns and weight classes so as to reduce fabric count and lower down sourcing cost. Some other companies are realizing significant cost reduction by timing orders so as to level the load over the course of the year. [Note: looks like Uniqlo’s model]

Building an integrated supply chain. As cited in the report, to balance sourcing cost and speed to market, one major apparel retailer builds 15 to 20 percent of the season’s styles and pre-positions about two-thirds of its raw material before the season (both in-house and from production partners). During the season, the company analyzes sales, staying in constant communication with its stores and with the design team. It resupplies items that are selling well through accelerated production and delivery, usually within three to four days. Designers then create new styles by adapting the best sellers using the pre-positioned material. [Note: looks like Zara’s model]

Innovating ways of production. The report suggests that bonding and gluing technologies (i.e. use bonded adhesive films and processes such as ultrasonic heating and high-frequency radiation to fuse together layers of fabric) can produce an entire small garment in 30 to 40 percent less time than conventional cut-and-sew. Digital technologies such as digital prototyping of textile designs can also significantly help apparel makers reduce waste and boost efficiency in pattern making. The potential application of 3D printing may further allow apparel makers to produce smaller batches, and possibly even allow for made-to-order production of individually designed and sized garments. This would not only allow companies to match the market’s growing need for speed, but also reduce the costs of retail inventory surpluses and associated price reductions.

Two additional thinking based on the report:

First, much attention has been given to the changing business environment of the apparel industry, such as rising labor cost in Asia, shifting market growth towards emerging economies and more sophisticated consumers’ demand in the era of omni-channel retailing. But what if the nature of the apparel industry is also changing: if one day labor cost is no longer a key factor in deciding where to produce and apparel production itself is no longer labor-intensive at all? Although automation of apparel production was not achieved in the 20st century, it may not be something totally impossible in the 21st century. We need to have bold thinking here.

Second, while the apparel industry is innovating its business model (i.e. the way to produce, the way to deliver products and the way to serve its customers), T&A educational programs also need to embrace innovative thinking. For example: are traditional course offerings sufficient enough (or still relevant) to prepare students’ job readiness in the 21st century? How to proactively respond to the changing nature of the apparel industry which has started to adopt more and more new technologies? What if we redefine the meaning of “T&A” majors and redesign the model of preparing the workforce for the apparel industry? (just like the question: for wearable technology, shall IT companies make apparel or apparel companies make IT products?)