Mackenzie & Co., a well-known consulting firm, recently released their latest report on the global apparel sourcing map. The report is drafted based on a 2013 summer survey with 29 chief purchasing officers (CPOs) in Europe and the U.S. who were responsible for an annual total sourcing value of $39 billion USD.  According to the report:

First, the global apparel sourcing cost is expected to rise modestly in the next 12 months (1.7% increase on average). Labor cost is tagged as the No.1 driving force of the rising sourcing cost.

Second, companies are sourcing less apparel from China, but they move in a very cautious way. In the meanwhile, Asia is still seen as the world hub for apparel manufacturing & exports in the years to come. Such a pattern reflects the exact criteria for sourcing decisions: a balance of price, quality, capacity, speed and risk.  Particularly, “proximity sourcing” is becoming increasingly important according to the surveyed CPOs. This rule shall also apply to China which has emerged as one of the world’s fastest growing apparel retail markets.

Third, despite the frequent reported corporate social responsibility problems, a combined consideration of labor cost advantage, free trade agreement benefits and capacity make Bangladesh remain the No. 1 hot pot for apparel sourcing for the next 5 years. 83% of surveyed CPOs plans an increase of apparel sourcing from Bangladesh in the years ahead.

Overall, sourcing will continue to be one of the most critical success factors for the global apparel industry.  The survey results reflect a more structural shift in the industry, while the traditional apparel company “caravan journey” becomes more complex. 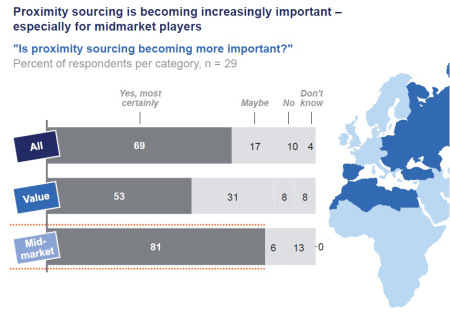