In the class, we briefly introduced the Trade Adjustment Assistance (TAA) program, which has played a critical role in the past decades both financially helping trade-displaced workers and tactically facilitating trade liberalization agendas in U.S. trade policy.

Rationale and purpose of TAA

It is widely acknowledged that trade liberalization can benefit consumers and create new market-access opportunities for export-oriented firms. However, expanded trade may also exert negative and often concentrated effects on domestic industries and workers that face increased import competition. Freer trade is not entirely free, but bears the cost of economic adjustment. TAA program therefore is designed to provide readjustment assistance to firms and workers that suffer dislocation (job loss) due to foreign competition or offshoring. To be noted, TAA has been a significant tool to assist workers in the U.S. textile and apparel industry. 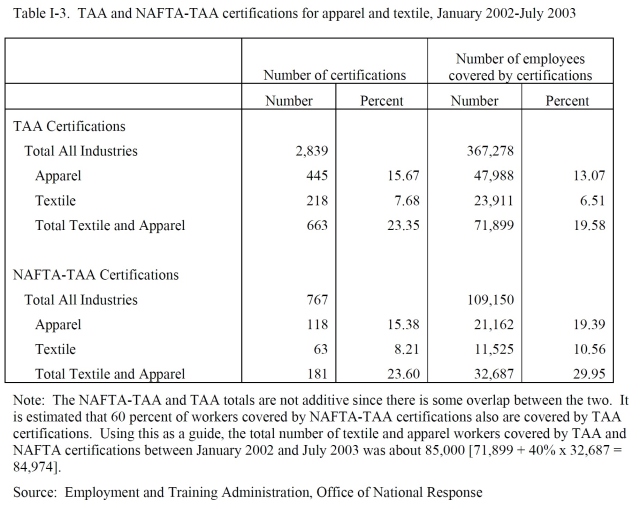 According to official statistics, since 1974, 2.2 million American workers have benefited from the TAA program, which provides workers with opportunities to obtain the skills, credentials, resources, and support they need to obtain good jobs in an in-demand occupation — and keep them. TAA was last authorized in June 2015 to continue through June 30, 2021.

To be eligible for TAA, petitioning workers must establish that foreign trade contributed importantly to their loss of employment. The role of foreign trade can be established in one of several ways:

Additionally, workers who lost jobs from firms that have been publicly identified by the United States International Trade Commission (USITC) as injured by a market disruption (for example, in anti-dumping, countervailing duty or safeguard cases) or other qualified action can also submit TAA petition.

TAA benefits for individual workers include:

TAA is financially covered by the federal government (i.e. taxpayers’ money) through annual appropriations. Appropriations for the program in FY2016 were $861 million, of which $450 million was for training and reemployment services and the remaining $411 million was for income support and other activities.

TAA is “presented as an alternative to policies that would restrict imports, and so provides assistance while bolstering freer trade and diminishing prospects for potentially costly tension (retaliation) among trade partners.”(Hornbeck, 2013)

Back in 1992, newly elected President Clinton oversaw the implementation of the North America Free Trade Agreement (NAFTA), but did so only after a number of conditions were attached, including TAA. In 2002, President Bush and the Republicans pushed hard to renew the long-expired trade promotion authority (TPA), but Democrats were unwilling to provide it unless TAA was reauthorized. TAA was also directly linked to the passage of three free trade agreements (FTAs) by US Congress in 2011, including US-Korea, US-Columbia and US-Panama FTAs. 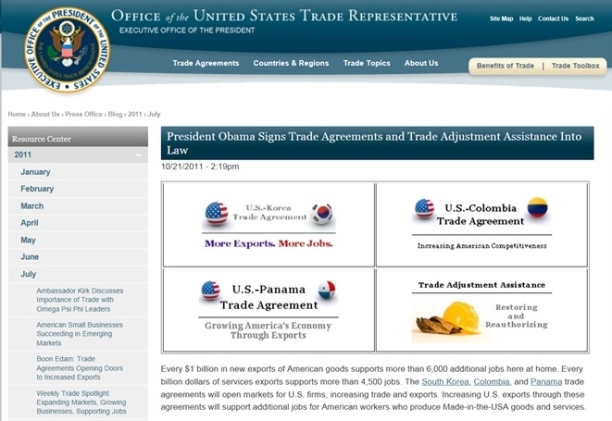 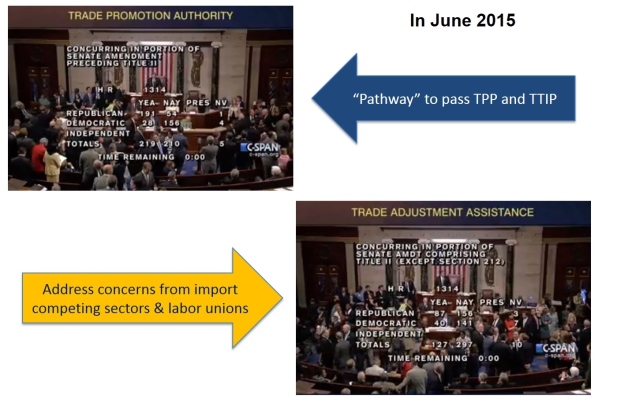 Critics strongly debate the merits of TAA on equity, efficiency, and budgetary grounds: