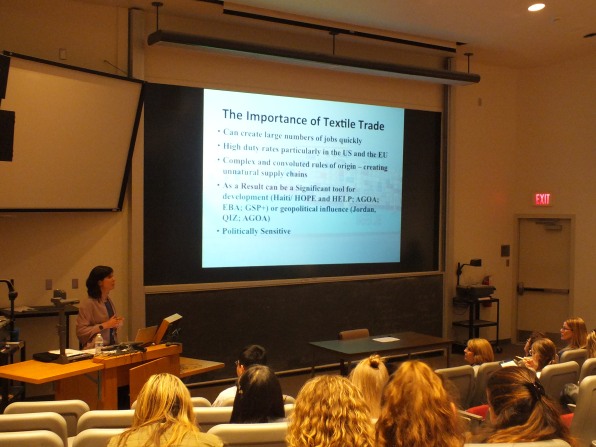 Gail Strickler, Assistant U.S. Trade Representative for Textiles (2009-2015), who negotiated the textile chapter under the Trans-Pacific Partnership (TPP), visited UD on April 13 and delivered a public lecture on The Global Apparel Industry – Style and Substance. The event is part of the Fashion and Diplomacy Lecture Series sponsored by the Institute for Global Studies and the Department of Fashion and Apparel Studies.

During the talk, Gail made a few comments regarding trade policy in the Trump administration:

First, Gail believes that the existing U.S. free trade agreements (FTAs), trade preference programs (PTAs) and the U.S. commitments at the World Trade Organization (WTO) are unlikely to be undone by President Trump because retaliatory actions from other trading partners would be inevitable.

Third, as observed by Gail, Wilbur Ross, the Commerce Secretary, has been given an expanded role in trade in the Trump Administration. Gail believes Ross’s appointment is likely to bode well for NAFTA and CAFTA-DR on textiles because Ross until recently owned the International Textile Group (ITG), which has significant investments in Mexico and relies heavily on CAFTA-DR for its textile sales.

However, Gail doesn’t think concentrating on trade deficits to define trade policy is a very “good method” of navigating the trade world. Interesting enough, last time when the U.S. trade deficit significantly shrank was during the 2008 financial crisis.

Gail is also a strong advocator of sustainability in the textile and apparel sector. She believes that trade programs can play a vital role in encouraging sustainable development, improving labor practices and facilitating sustainable regional supply chains. According to Gail, powerful the labor provisions in trade programs can be if strong incentives are coupled with a credible threat of rapid enforcement – little evidence of effectiveness if only one (or fewer) of these conditions is met. However, comparing with enforcing labor provisions, Gail finds promoting and enforcing environmental sustainability standards through trade agreements is much more complex in the textile and apparel sector and will require creativity and strong participation from private sectors and consumers.

Before the public lecture, Gail visited FASH455 and had a special discussion session with students on topics ranging from the textile and apparel rules of origin in TPP, NAFTA renegotiation, AGOA renewal and state of the U.S. textile and apparel industry.