1. China’s apparel retail market remains strong despite slower growth. China’s apparel retail sales reached 1,141billion RMB (or $187 billion USD) in 2013, rose by 11.6 percent from 2012. On average, each urban household in China spent 1,902 RMB (or $306USD) on clothing in 2013, accounting for 10.6 percent of their total annual expenditure. [note: in the US, clothing accounts for around 3 percent of household annual expenditure]. It is estimated that China will replace the United States and become the world’s largest apparel retail market in 2017. 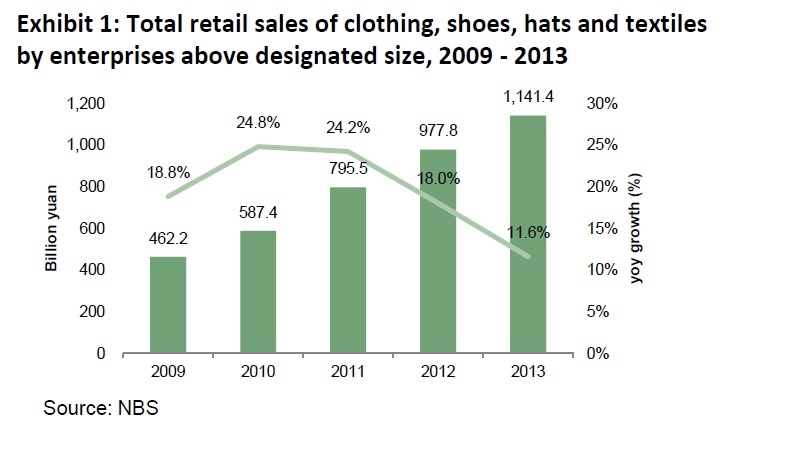 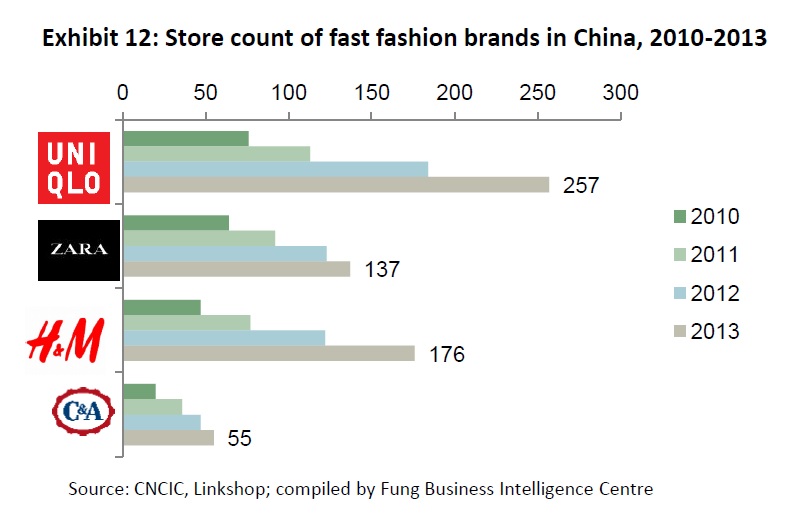 2. Women’s wear is the largest contributor to China’s total apparel sales. A survey of 100 major retailers in China shows that women’s wear accounted for 32.7 percent of their clothing sales from 2012 to 2013. However, women’s wear is a highly fragmented and competitive market in China. For example, the top ten brands altogether only accounted for 21.43 percent of market share in 2013.

3. Children’s wear and sportswear are the two growing areas in China’s apparel market. Specifically, retail sales of children’s wear in China reached 6.3 billion RMB (or $1 billion USD) in 2013, registered growth of 12.7 percent. Because Chinese government has relaxed its “one-child policy”, China is estimated to add 1-2 million extra kids over the next few years, suggesting further market expansion possibility. Thanks to Chinese consumers’ increasing interest in sports and outdoor activities, sales of sportswear enjoyed 35 percent growth from 2012 to 2013. Functional products with fashionable designs are the key to win the market. While international brands (such as Nike and Adidas) are mainly concentrated in tier 1 and tier 2 cities, domestic brands are still dominating the lower-tier cities where more growth potential is involved.

4. Department stores and specialty stores remained the main channels for apparel distribution in China, accounting for 36.3 percent and 29.7 percent of market share respectively in 2013. Specifically, department store remains the main channel for mid to high-end apparel sales in China, although specialty stores are increasingly preferred by apparel brand owners. As a common business practice in China, apparel brand owners manage their self-operated specialty stores in key cities while leaving other locations to franchisees as distributors. On the other hand, hypermarkets and supermarkets are popular retailing channels for lower-priced apparel, many of which are with poor brand recognition or unbranded.

5. Online retailing is the fastest growing retail channel in China for apparel. According to one source, the total online apparel transaction value in China reached 434.9 billion RMB (or $36.2 billion USD) in 2013, increased by 42.6 percent from 2012. Similar as the emerging of “omni-channel retailing” in the US, apparel companies operating in China are making more efforts to explore“O2O” (online and offline integration). It shall be noted that more and more overseas apparel brands see e-commerce as a strategic means to reach Chinese consumers. For example, even luxury brands such as Burberry and Hugo Boss have opened online store through a B2C platform (like Tmall) in China.