The European Apparel and Textile Confederation (Euratex) recently released its position paper on textile and apparel (T&A) rules of origin in the Trans-Atlantic Trade and Investment Partnership (T-TIP). According to the paper:

In contrast, the National Council of Textile Organizations (NCTO) which represents the interests of the U.S. textile industry insists that T-TIP shall adopt the strict “yarn-forward” rule. Particularly, NCTO is worried that a less restrictive rules of origin in T-TIP will have ramifications for the negotiation of future FTAs, including the Trans-Pacific Partnership (TPP). 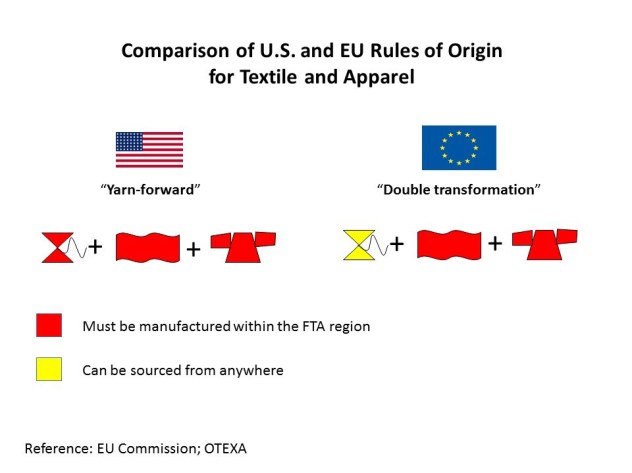 Second, Euratex opposes applying the “value-added rule” to the T&A sector in T-TIP. Based on the value-added approach, country of origin can be granted when “manufacture in which the value of all the materials used does not exceed certain % of the ex-works price of the products.” Value added is typically calculated based on a subtraction formula, i.e. value added=ex-works price of the product obtained minus the value of all the non-originating material.

Euratex does not think the “value added rule” will work for T&A, because: 1) “variability of the value of originating/non-originating products (fibers, yarns or fabrics) used in spinning or weaving or making-up” will make it practically difficult to calculate value added. 2) “the value added principle is uncontrollable as the added value can be influenced by many factors such as raw materials price, financing, exchange rate manipulations etc.”