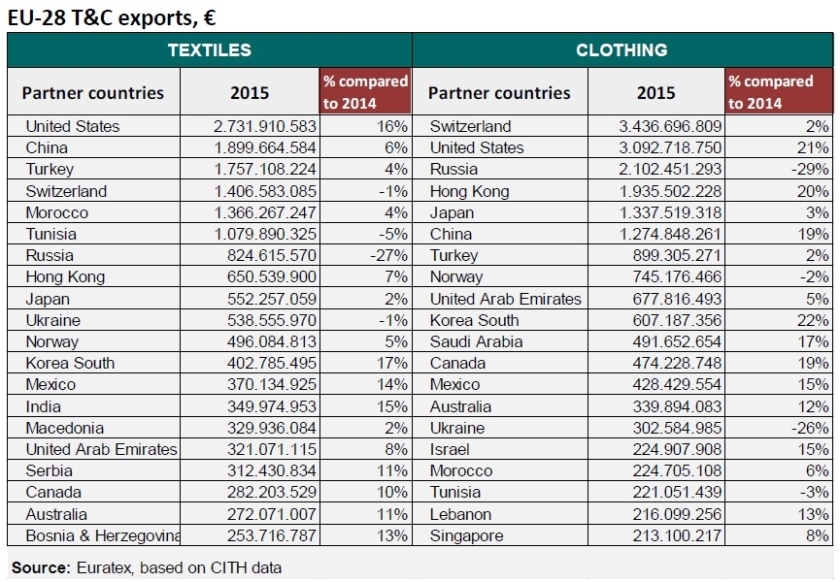 According to statistics released by the European Apparel and Textile Confederation (Euratex), extra-EU trade for textile and apparel (T&A) achieved record high in 2015, suggesting a positive economic state of the industry.

Specifically, extra-EU T&A exports went up by 3.6 percent in 2015. Among the key export markets: thanks to the appreciation of U.S. dollar against Euro last year, EU’s textile and apparel exports to the United States respectively increased by 16 percent and 21 percent. Despite China’s slowed economic growth, EU’s export to China was also robust: 6 percent growth for textile and 19 percent growth for apparel. However, EU’s T&A exports to Russia (down 27 percent for textile and down 29 percent for apparel) and Ukraine (down 26 percent for apparel) sharped dropped, reflecting the substantial impact of political instability on trade.

In terms of the import side, extra-EU T&A imports rose 9.6% in 2015. China remained the top external T&A supplier to the EU, however, other Asian countries with lower-production cost are quickly catching up. This is particularly the case for apparel: while EU’s apparel imports from China went up 6 percent in 2015, imports from Bangladesh (up 24 percent), Cambodia (up 33 percent), Vietnam (up 26 percent), Pakistan (up 25 percent) and Myanmar (up 79 percent) grew much faster, suggesting a relative decline of China’s market share in the EU market.