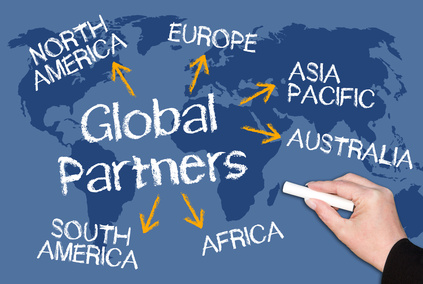 #1 Why or why not the textile and apparel industry should get involved in policy advocacy?

#2 Do you think the current U.S. trade policy reflects the interests of the U.S. textile and apparel industry? Please provide detailed examples.

#3 It is said that “trade is a way for countries to strengthen partnerships and alliances, promote peace and trust between the cooperating nations, and help other countries in need.” Do you think this principle still holds today?

#5 What do you take away from Case Study 2 regarding the making of U.S. trade policy? 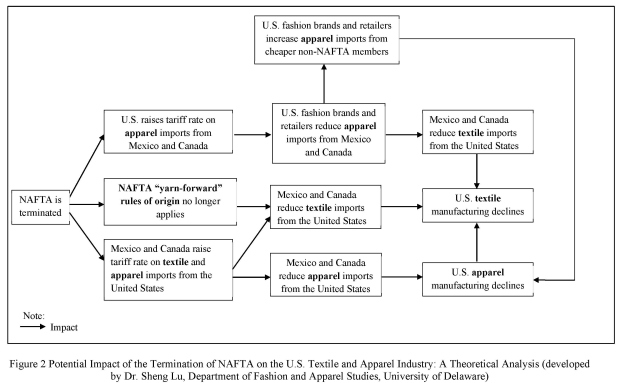 Since its taking effect in 1995, NAFTA, a trade deal between the United States, Mexico, and Canada, has raised heated debate regarding its impact on the U.S. economy. President Trump has repeatedly derided NAFTA, describing it as “very, very bad” for U.S. companies and workers, and he promised during his campaign that he would remove the United States from the trade agreement if he could not negotiate improvements.

The U.S. textile and apparel (T&A) industry is a critical stakeholder of the potential policy change, because of its deep involvement in the regional T&A supply chain established by the NAFTA. Particularly, over the past decades, trade creation effect of the NAFTA has significantly facilitated the formation of a regional T&A supply chain among its members. Within this supply chain, the United States typically exports textiles to Mexico, which turns imported yarns and fabrics into apparel and then exports finished apparel back to the United and Canada for consumption.

So what will happen to the U.S. T&A industry if NAFTA no longer exists? Here is what I find*: 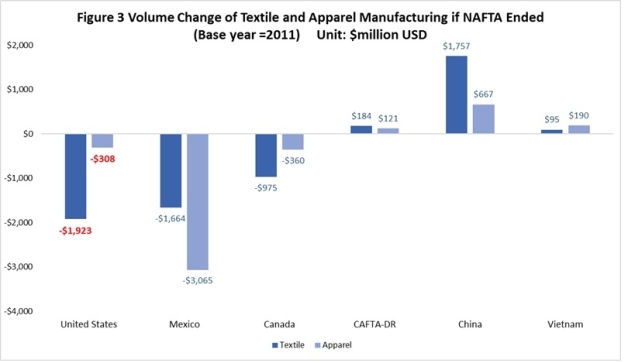 Third, ending NAFTA will further undercut textile and apparel manufacturing in the United States rather than bring back “Made in the USA.” Specifically, annual U.S. textile and apparel manufacturing will decline by $1,923 million (down 12.8%) and $308 million (down 3.0%) respectively compared to the base year level in 2015 (H3 is supported). Weaker demand from the NAFTA region is the primary reason why U.S. T&A manufacturing will suffer a decline.

These findings have several important implications. On the one hand, the results suggest that the U.S. T&A will be a big loser if the NAFTA no longer exists. Particularly, ending the agreement will put the regional T&A supply chain in jeopardy and make the U.S. textile industry lose its single largest export market—Mexico. On the other hand, findings of the study confirm that in an almost perfectly competitive market like apparel, raising tariff rate is bound to result in trade diversion. With so many alternative suppliers out there, understandably, ending the NAFTA will NOT increase demand for T&A “Made in the USA,” nor create more manufacturing jobs in the sector. Rather, Asian textile and apparel suppliers will take away market shares from Mexico and ironically benefit most from NAFTA’s dismantlement.

*Note: The study is based on the computable general equilibrium (CGE) model developed by the Global Trade Analysis Project (GTAP). Data of the analysis came from the latest GTAP9 database, which includes trade and production data of 57 sectors in 140 countries in 2015 as the base year. For the purpose of the study, we assume that if NAFTA no longer exists, the tariff rate applied for T&A traded between NAFTA members will increase from zero to the normal duty rate (i.e. the Most-Favored-Nation duty rate) in respective countries.

On the positive side, the global GDP growth is expected to rebound to 2.7% in 2017 from 2.3% in 2016, which will contribute to the expansion of world trade. Notably, WTO expects emerging economies to return to modest economic growth in 2017. However, WTO sees policy uncertainty, including the imposition of restrictive trade measures and monetary tightening, a main risk factor to world trade this year. 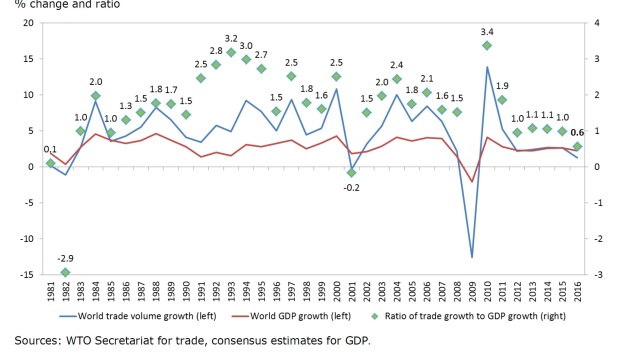 WTO also noted that since the financial crisis, the ratio of trade growth to GDP growth has fallen to around 1:1. And 2016 marked the first time since 2001 that this ratio has dropped below 1, to a ratio of 0.6:1. Historically, the volume of world merchandise trade has tended to grow about 1.5 times faster than world output. WTO is cautiously optimistic that the ratio will partly recover in 2017, but the ratio will remain a cause for concern.

At the press conference, Trump Administration’s trade policy receives significant attention. But according to  Roberto Azevêdo, Director-General of WTO, “just an overall statement of the intention to go one particular way or another, does not tell us what the trade policy is and does not tell us what the impact of that trade policy will be. Instead, the devil is in the details”. Roberto said he is waiting to see Trump’s new trade team in place (for example, the new US Trade Representative) and he looks forward to the meaningful dialogues with the team to know more details and clarity of U.S. trade policy. Until then, any comments on the impact of Trump Administration’s trade policy would be just speculations.

Gail Strickler, Assistant U.S. Trade Representative for Textiles (2009-2015), who negotiated the textile chapter under the Trans-Pacific Partnership (TPP), visited UD on April 13 and delivered a public lecture on The Global Apparel Industry – Style and Substance. The event is part of the Fashion and Diplomacy Lecture Series sponsored by the Institute for Global Studies and the Department of Fashion and Apparel Studies.

During the talk, Gail made a few comments regarding trade policy in the Trump administration:

First, Gail believes that the existing U.S. free trade agreements (FTAs), trade preference programs (PTAs) and the U.S. commitments at the World Trade Organization (WTO) are unlikely to be undone by President Trump because retaliatory actions from other trading partners would be inevitable.

Third, as observed by Gail, Wilbur Ross, the Commerce Secretary, has been given an expanded role in trade in the Trump Administration. Gail believes Ross’s appointment is likely to bode well for NAFTA and CAFTA-DR on textiles because Ross until recently owned the International Textile Group (ITG), which has significant investments in Mexico and relies heavily on CAFTA-DR for its textile sales.

However, Gail doesn’t think concentrating on trade deficits to define trade policy is a very “good method” of navigating the trade world. Interesting enough, last time when the U.S. trade deficit significantly shrank was during the 2008 financial crisis.

Gail is also a strong advocator of sustainability in the textile and apparel sector. She believes that trade programs can play a vital role in encouraging sustainable development, improving labor practices and facilitating sustainable regional supply chains. According to Gail, powerful the labor provisions in trade programs can be if strong incentives are coupled with a credible threat of rapid enforcement – little evidence of effectiveness if only one (or fewer) of these conditions is met. However, comparing with enforcing labor provisions, Gail finds promoting and enforcing environmental sustainability standards through trade agreements is much more complex in the textile and apparel sector and will require creativity and strong participation from private sectors and consumers.

Before the public lecture, Gail visited FASH455 and had a special discussion session with students on topics ranging from the textile and apparel rules of origin in TPP, NAFTA renegotiation, AGOA renewal and state of the U.S. textile and apparel industry.

The updated version is available HERE

The following analysis is from the latest Just-Style Op-ed Is China Losing Its Edge as a US Apparel Supplier.

A fact-checking review of trade statistics in 2016 of a total 167 categories of T&A products categorized by the Office of Textiles and Apparel (OTEXA) suggests that textile and apparel (T&A) “Made in China” have no near competitors in the U.S. import market. Specifically, in 2016: 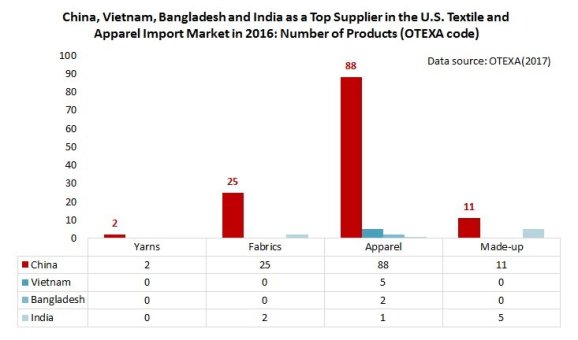 In comparison, for those Asian T&A suppliers regarded as China’s top competitors: 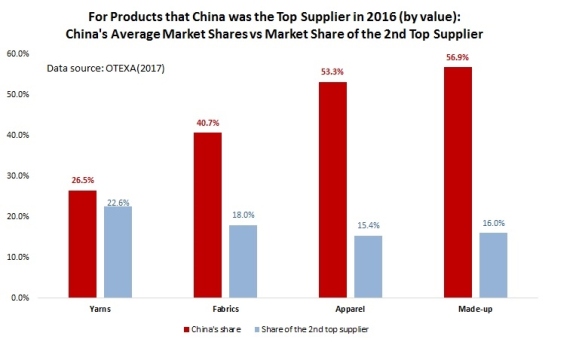 Notably, China not only was the top supplier for many T&A products but also held a lion’s market shares. For example, in 2016:

Are the results surprising? How to explain China’s demonstrated price competitiveness despite its reported rising labor cost? What’s your outlook for the future of China as a sourcing destination for U.S. fashion brands and retailers? Please feel free to share your views.