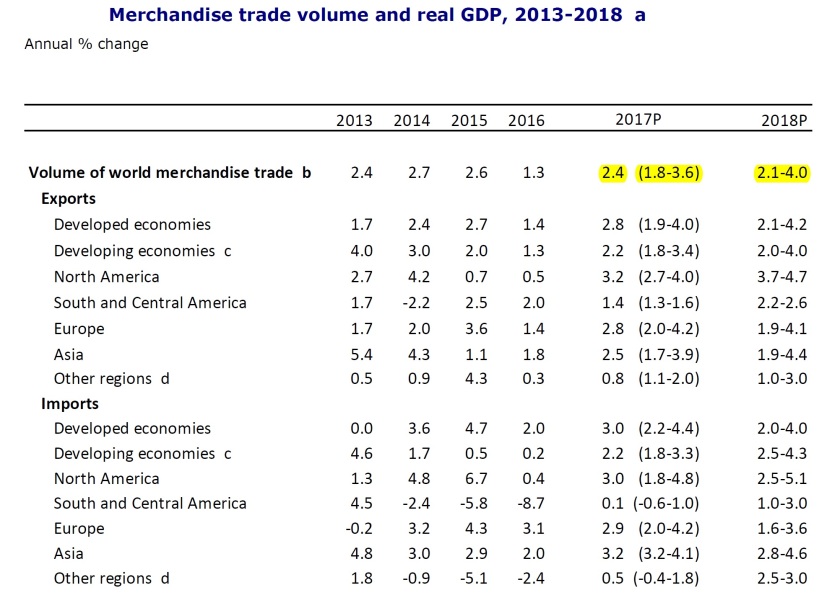 On the positive side, the global GDP growth is expected to rebound to 2.7% in 2017 from 2.3% in 2016, which will contribute to the expansion of world trade. Notably, WTO expects emerging economies to return to modest economic growth in 2017. However, WTO sees policy uncertainty, including the imposition of restrictive trade measures and monetary tightening, a main risk factor to world trade this year.

WTO also noted that since the financial crisis, the ratio of trade growth to GDP growth has fallen to around 1:1. And 2016 marked the first time since 2001 that this ratio has dropped below 1, to a ratio of 0.6:1. Historically, the volume of world merchandise trade has tended to grow about 1.5 times faster than world output. WTO is cautiously optimistic that the ratio will partly recover in 2017, but the ratio will remain a cause for concern.

At the press conference, Trump Administration’s trade policy receives significant attention. But according to  Roberto Azevêdo, Director-General of WTO, “just an overall statement of the intention to go one particular way or another, does not tell us what the trade policy is and does not tell us what the impact of that trade policy will be. Instead, the devil is in the details”. Roberto said he is waiting to see Trump’s new trade team in place (for example, the new US Trade Representative) and he looks forward to the meaningful dialogues with the team to know more details and clarity of U.S. trade policy. Until then, any comments on the impact of Trump Administration’s trade policy would be just speculations.