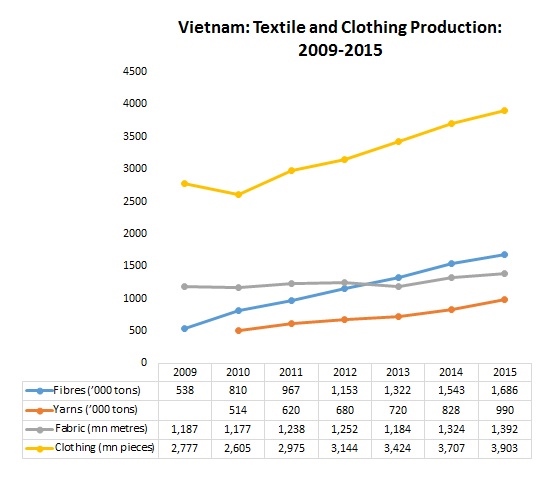 Vietnam has a substantial textile and clothing industry comprising around 4,000 enterprises, of which the majority were located in the country’s two principal population centers—Ho Chi Minh City and Hanoi. Around 70% of these enterprises were involved in the manufacture of clothing. A further 17% were involved in the fabric sector, 6% in the yarn sector, 4% in the dyeing sector and 3% in the accessories sector.

It is estimated that around 70% of Vietnam’s textile and clothing production is dependent on the cut and trims operations, using imported textiles and other inputs predominantly from China. This problem is not limited to a single category as the country needs to import man-made fibers, yarns, fabrics, and accessories as well as raw cotton.

The dyeing and finishing segments of the supply chain remain fairly underdeveloped. In the past, the Vietnamese government has issued tightly controlled permits for these operations. Also, there has been a deficiency of investment in these segments because of unclear regulations, and this has resulted in a bottleneck in the supply chain.

Vietnamese textile and clothing exports began to gain momentum in 2001 when trading relationships were established with Western countries (e.g., the US-Vietnam Textile Agreement). The industry’s exports received a further boost after Vietnam joined the World Trade Organization (WTO) at the start of 2007, and the quotas which had been restricting imports of Vietnamese goods in the US market were eliminated.

In 2016, Vietnam’s textile and clothing exports totaled $28 billion (84% were clothing), which represented 16.0% of Vietnam’s total merchandise exports. Globally, Vietnam was the world’s third largest apparel exporter in 2015, after China and Bangladesh (WTO, 2016).

The Vietnam Textile & Apparel Association (VITAS) expects Vietnam’s textile and clothing exports to enjoy an average 15% annual growth in the next four years and exceed $50 billion USD by 2020.

Outlook of Sourcing from Vietnam by US Fashion Companies

According to the 2017 US Fashion Industry Benchmarking Study, Vietnam is the 2nd most used sourcing destination by respondents. Particularly, the most commonly adopted sourcing model is shifting from “China Plus Many” to “China Plus Vietnam Plus Many”: 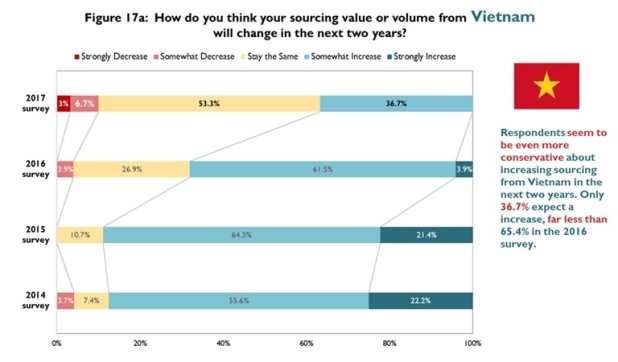 Additionally, U.S. fashion companies intend to source more from Vietnam through 2019, but imports may grow at a relatively slow pace, possibly due to the United States’ withdrawal from the Trans-Pacific Partnership (TPP) and the increasing labor costs in the country.

5 thoughts on “Outlook of Sourcing from Vietnam (Updated: August 2017)”