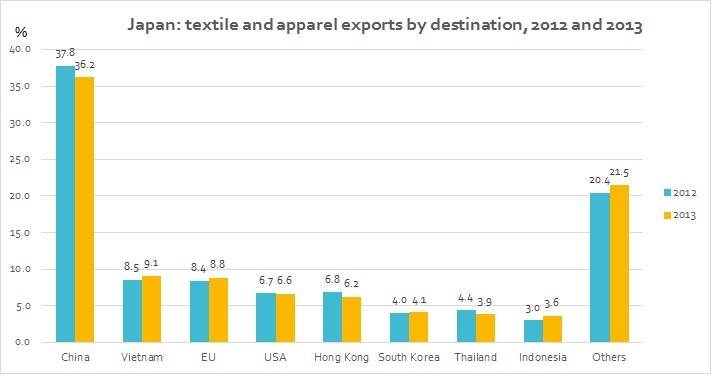 Statistics also show that Vietnam not only is Japan’s second largest T&A export market, but also is one of the fastest growing export markets for Japan. In 2013, 9.1% of Japan’s T&A exports went to Vietnam (mostly were textiles), increased from 8.5% in 2012. In terms of absolute value, Japans’ T&A exports to Vietnam has also kept growing fast in recent years: 17.1% increase in 2013, 9.7% in 2012 and 27.3% in 2011, much higher than the growth rate of Japan’s overall T&A exports over the same period. Additionally, about 26% of Japan’s textile exports to Vietnam in 2013 were man-made fiber fabrics (SITC 653), followed by special yarns and fabrics (SITC 657) which accounted for 21% in terms of value. This product structure well matches with Japan’s overall textile exports to the world. 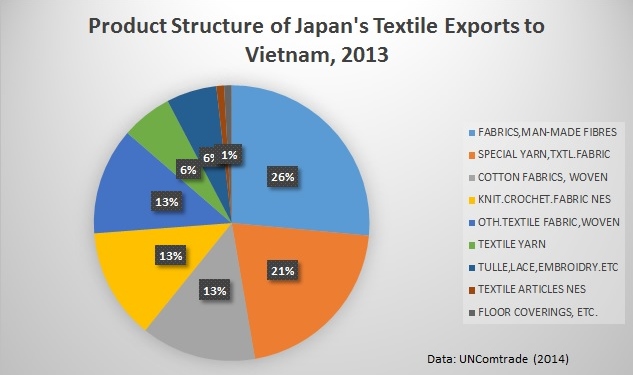 On the other hand, Japans’ T&A exports to the US also grew by 8.1% in 2013, following a 3.2% rise in 2012. Fastest growing category of Japan’s T&A exports to the US in 2013 include blue denim fabric, non-textured filament yarn, wool knitted shirts and blouses and miscellaneous manufactured products made from man-made fibers.

However, the solid performance of Japan’s T&A exports in 2013 “failed to reinvigorate domestic production”. According to the report, Japan’s total T&A exports declined by 2.0% from 2012 to 2013, following a 2.3% fall a year earlier. However, production of miscellaneous textile products in Japan went up 0.6% in 2013.

Welcome for any comments and suggestions.

Related reading
Lu, S. (2014). Does Japan’s accession to the Trans-Pacific Partnership an opportunity or a threat to the U.S. textile industry: A quantitative analysis. Journal of the Textile Institute. (ahead of print version)