Potential impact of the Trans-Pacific Partnership (TPP) remains a hot topic among the U.S. textile and apparel industry. A recent news report suggests that implementation of the agreement will negatively affect clothing manufacturers in LA, where most remaining U.S. apparel manufacturing capacity is located.

According to the news report, “small, independent apparel manufacturers (in LA) did not see big gains from TPP because they did not want to outsource their work, but it put them at a competitive disadvantage.” One local industry estimation quoted in the report claims that “Southern California’s apparel manufacturing will shrink an additional 20 percent if the TPP goes into effect.”

The report further says that “A key question for the apparel industry is whether the agreement includes a yarn-forward provision, which requires material to come from a TPP country in order to be duty-free.” However, the report does not explain why the “yarn-forward” rule could potentially benefit apparel manufacturing in the United States.

The followings are my personal preliminary estimation* of the potential impact of TPP on U.S. T&A manufacturing. Results show that, compared to the base year level in 2011: 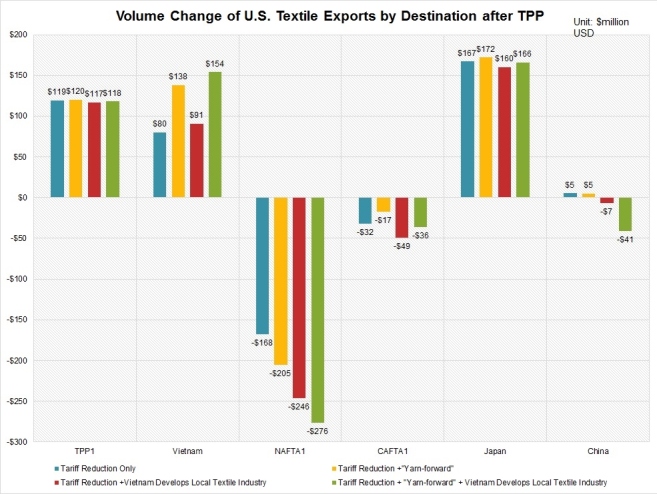 *Note:1. The estimation is conducted based on the latest Global Trade Analysis Project (GTAP) 9.0 database which includes complete bilateral trade information, transport and protection linkages of 140 countries and 57 sectors. Four scenarios are estimated:

7 thoughts on “Impact of TPP on U.S. Textile and Apparel Manufacturing: A Preliminary Estimation”