In its newly released Economic Impact of Trade Agreement Implemented under Trade Authorities Procedures, 2016 Report, the U.S. International Trade Commission (USITC) provides a quantitative assessment on the impact of trade on manufacturing jobs in the U.S. textile and apparel industry. According to the report:

From the academic perspective, a sizable return of apparel manufacturing job in the United States seems to be extremely unlikely given the nature of the U.S. and global economy in the 21st century.

First, it is all about comparative advantage suggested by classic trade theories. The World Bank data show that from 1980 to 2010, the U.S. GDP increased by 424% (note: world GDP increased by 484% over the same period) whereas the total U.S. population was only 23% higher in 2010 than in 1980 (note: world population increased by 65.21% over the same period). This suggests that the United States actually is becoming more capital & technology abundant with less comparative advantage in manufacturing labor intensive apparel. A sizable return of apparel manufacturing in the United States might only happen in the following two occasions: 1) apparel manufacturing can be automated like textile manufacturing; 2) substantial amount of foreign workers were allowed to work in the United States. Unfortunately, neither of the two occasions seem likely to happen at least in the near future.

Second, it is about US apparel company’s business model in the 21st century. The suggested dominant types of apparel companies in the United States today are “branded manufacturers” and “marketers” whose business models heavily rely on global sourcing and non-manufacturing activities such as branding, marketing and design (Gereffi, 1999). If you carefully read US apparel companies’ annual reports, seldom you’ll see a company still regards “manufacturing” as a key competitive advantage or an area of strategic importance to invest in the future.

Additionally, according to data from the U.S. Bureau of Economic Analysis (BEA), the percentage of compensation of employees in the apparel industry’s total value added has been gradually declining since 2008. Similar trend is also observed in the U.S. economy and the U.S. manufacturing sector as a whole. Does the result imply that labor input is becoming less important to the output of the U.S. apparel industry? Or does the result suggest that U.S. apparel companies are more willing to invest on buying machines than hiring more people? Maybe it is the time that we shall pay more attention to the labor-capital substitution trend in the U.S. apparel industry.

In its annual industry analysis report, the Textile World (TW) presents another optimistic outlook for the U.S. textile industry in year 2015.

First, the U.S. textile industry is predicted to be in a good shape economically this year. For example, according to TW, shipment of textile mills (NAICS 313 &314) is expected to increase 3-4 percent in 2015 from last year. Value of apparel manufacturing (NAICS 315) may also increase 5 percent. Additionally, market demand for basic mill products (fibers and fabrics), nonwoven fabrics and fabrics designed for activewear could be particularly strong this year.

Second, the U.S. textile industry will continue to bring back “made in USA” through capitalization. As observed by TW, new plant and equipment spending is widespread in the U.S. textile industry in recent years, covering activities ranging from fibers, spinning, nonwovens, composites, technical fibers to textile chemical. TW further estimates that some 2.2 percent of mill shipment dollars will be spent on new investment in 2015, a level much higher than a few years ago.

Third, trade deficit in the U.S. textile industry is gradually shrinking. On one hand, TW estimates that due to China’s decreasing market share, imports of T&A to the United States will down 1 percent in 2015. This trend may continue in the years ahead. On the other hand, TW estimates that the U.S. textile exports will continue to grow for the straight 5th year in 2015. However, TW doesn’t believe textile and apparel manufacturing will have any big near-term shift back to the U.S, nor the total employment in the industry (because increased production is to be made by machines).

Fourth, sustainability and supply chain management will attract even more attention by the industry in 2015. As mentioned by the TW report, consumers nowadays have become more aware of the environmental impact of textile and apparel manufacturing. This pushes companies to make more efforts to address issues such as toxins, waste and the amount of water used for production. On the other hand, supply chain management has started to play even more important roles in controlling cost and increasing profit. For example, quoted by TW, performance of supply chain management may result in 10 percentage point differences in profit margin in the textile industry nowadays.

Fifth, trade policy will continue to have a substantial impact on the the U.S. textile industry.  2015 could be a big year for trade policy in the United States. Things that are on the top watch list in 2015 include details of the Trans-Pacific Partnership negotiation and whether the Trade Promotion Authority (TPA) bill can be passed by Congress. 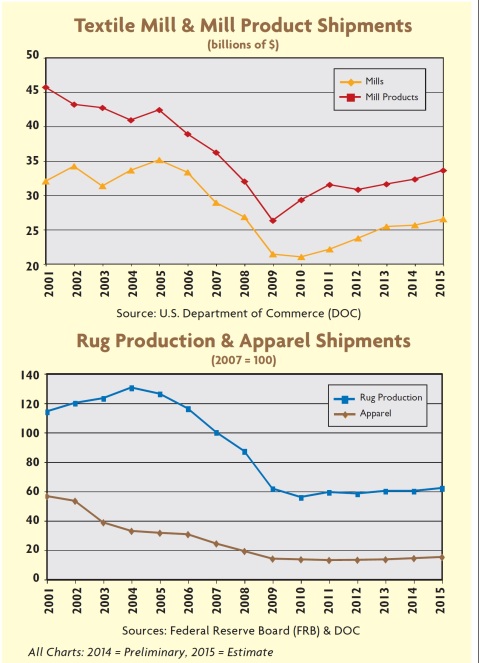 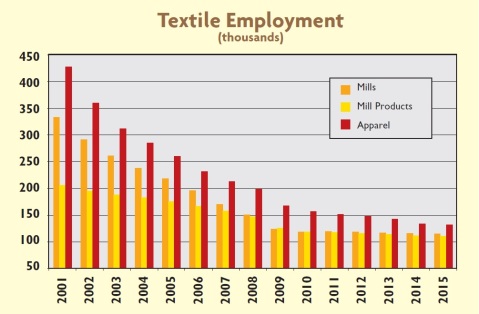 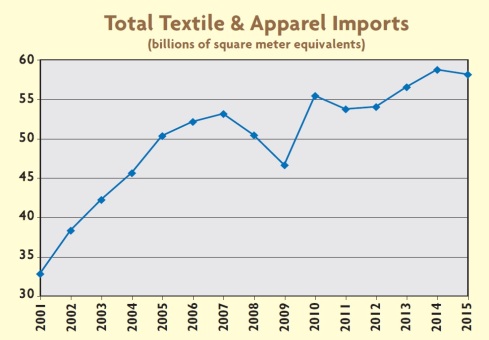