In its annual release, the European Apparel and Textile Federation (Euratex) provides a skeletal statistical profile of the EU textile and apparel (T&A) in 2013. Most statistics cited in the report comes from the Eurostat.

Consumption
Affected by the slow economic recovery in the region, EU consumers seem still hesitant in expending more money on T&A products in 2013. Value of T&A consumption in EU (28) stood at €483.9 billion in 2013, only a slight increase of 0.2 percent from 2012.

Trade
The two-way EU T&A trade enjoyed a modest growth from 2012 to 2013. Particularly, despite reported decline in production, value of EU apparel exports in 2013 increased 4 percent, reflecting the growing demand for “made in EU” apparel products in other parts of the world. In terms of import, consistent with the pattern of consumption, EU apparel imports slightly increased 1.7 percent from 2012 to 2013. It should be noted that China is gradually losing market share in the EU apparel import market. From 2012 to 2013, value of China’s apparel exports to the EU declined 4 percent, compared with 10 percent growth of Bangladesh. 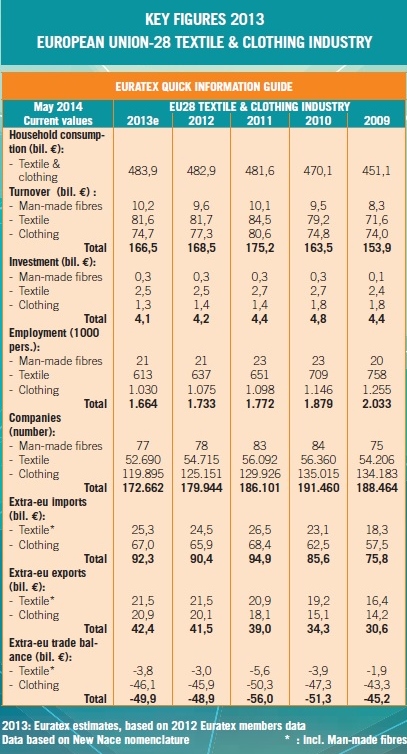 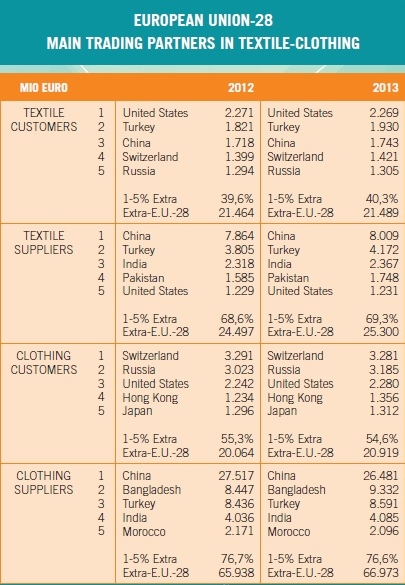