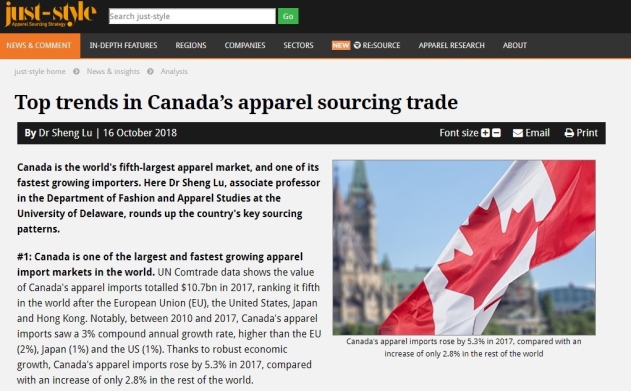 The full article is available HERE

First, Canada is one of the largest and fastest growing apparel import markets in the world. Data from the UN Comtrade show that the value of Canada’s apparel imports totaled $10.7bn in 2017, which ranked the fifth in the world, only after the European Union (EU), the United States, Japan, and Hong Kong.

Second, the Asian region as a whole is the dominant apparel supplier for Canada. Measured in value, as much as 80.9 percent of Canada’s apparel imports in 2017 came from Asia. Specifically, China (40.6 percent), Bangladesh (11.1 percent), Cambodia (8.1 percent) and Vietnam (7.7 percent) were the top individual supplier for Canada in 2017, and all of them are located in Asia. Meanwhile, Canadian apparel companies are gradually diversifying their sourcing base: the Herfindahl Index (HHI), a commonly adopted measure of market concentration, declined from 0.3 in 2010 to 0.19 in 2017.

Third, the NAFTA-region remains an important apparel-sourcing base for Canada, but its overall influence is in decline. Measured in value, the United States and Mexico were the 6th and 9th top apparel supplier for Canada in 2017 respectively. However, facing the competition from Asia, the United States and Mexico combined accounted for only 6.4 percent of Canada’s apparel imports in 2017, a significant drop from 9.8 percent back in 2007.

Fourth, free trade agreements and trade preference programs provide duty-saving opportunities for apparel sourcing in Canada. In 2017, Canada applied an average tariff rate of 17.1 percent on imports of knitted apparel (HS Chapter 61) and 15.9 percent on woven apparel (HS chapter 62). As of August 2018, Canada has 17 free trade agreements (FTAs) and trade preference programs (TPAs) in force, offering preferential or duty-free market access to Canada. Traditionally, a substantial portion of Canada’s FTA partners come from the Western Hemisphere, such as Chile, Costa Rica, Colombia, Peru, Honduras, and Panama. However, in recent years, Canada has been actively negotiating and reaching new FTAs with countries in Asia (such as South Korea, India, and Japan) and Europe (including the European Union and Ukraine).

Compared with the United States, in general, Canada adopts more liberal rules of origin (RoO) for apparel products. Quite a few Canada FTAs allow companies to source yarns or even fabrics from anywhere in the world – with the finished products still enjoying duty-free treatment when exported to Canada.

3 thoughts on “Patterns of Canada’s Apparel Sourcing and Trade”