In June 2021, the U.S. International Trade Commission (USITC) released the 2021 Economic Impact of Trade Agreements Implemented under Trade Authorities Procedures report. By using both qualitative and quantitative methods, USITC assessed the impact of trade agreements on U.S. industries, including workers, since 2016. Below are the key findings related to the textile and apparel sector:

Third, the textile and apparel-specific rules in U.S. free trade agreements are complicated and often hinder the usage of the trade agreements. As noted by USITC, the U.S. duty on imported textile and, especially, apparel goods are among the highest of all product categories. Despite the duty-saving incentives, only 12.1% of U.S. textile and apparel imports came in under FTAs in 2020, even lower than 16.7% in 2007 when fewer FTAs were in force.

The complexity of the textile and apparel-specific rules of origins (ROOs) is a significant cause of the low FTA utilization rate. As USITC noted, “No two FTAs using the tariff shift model contain the same ROOs for apparel goods…for some importers, the strict preference rules of origins (ROOs), along with the record-keeping and documentation requirements the rules entail, make the cost of compliance too great to take full advantage of the duty-free opportunities.” According to the annual USFIA fashion industry benchmarking study, the surveyed U.S. fashion companies consistently expressed the same concerns about the too restrictive ROOs in U.S. FTAs.

Related, the USITC report noted, “some U.S. domestic textile industry representatives state that the existing FTA rules follow a simple template designed to benefit upstream manufacturers in the textile and apparel supply chain.” Having to use more expensive domestic-made fibers and yarns reduces the price competitiveness of U.S. fabrics and home textiles in the export market.

Further, the USITC report explains the history of the “Short supply” and “Tariff-preference level, TPL” mechanisms in U.S. free trade agreements. However, the report does not provide an assessment of their trade impacts.

From findings of the 2020 USFIA Fashion Industry Benchmarking Study :

The surveyed U.S. fashion companies demonstrate more readiness and interest in using the US-Mexico-Canada Trade Agreement (USMCA) for apparel sourcing purposes in 2020 than a year ago:

For companies that were already using NAFTA for sourcing, the vast majority (77.8 percent) say they are “ready to achieve any USMCA benefits immediately,” up more than 31 percent from 2019.

Even for respondents who were not using NAFTA or sourcing from the region, about half of them this year say they may “consider North American sourcing in the future” and explore the USMCA benefits.

Nevertheless, when asked about the potential impact of USMCA on companies’ apparel sourcing practices, some respondents expressed concerns about the rules of origin changes. These worries seem to concentrate on denim products in particular. For example, one respondent says, “USMCA changes negatively affects our denim jeans sourcing particularly with the new pocketing rules of origin.” Another adds, “Denim pocketing ROO change is a concern but manageable.”

It also remains to be seen whether USMCA will boost “Made in the USA” fibers, yarns, and fabrics by limiting the use of non-USMCA textile inputs. For example, while the new agreement expands the Tariff Preference Level (TPL) for U.S. cotton/man-made fiber apparel exports to Canada (typically with a 100 percent utilization rate), these apparel products are NOT required to use U.S.-made yarns and fabrics.

The study is available HERE

USMCA vs. NAFTA1.0: The USMCA will continue to adopt the “yarn-forward” rules of origin. The USMCA will also newly require sewing thread, coated fabric, narrow elastic strips, and pocketing fabric used in apparel and other finished products to be made in a USMCA country to qualify for duty-free access to the United States.

U.S. apparel and retail industries: The U.S. apparel industry opposes “yarn forward” and argues that apparel should be considered of North American origin under a more flexible regional “cut and sew” standard, which would provide maximum flexibility for sourcing, including the use of foreign-made yarns and fabrics.

USMCA vs. NAFTA1.0: With some adjustments, the USMCA would continue a program that allows duty-free access for limited quantities of wool, cotton, and man-made fiber apparel made with yarn or fabric produced or obtained from outside the NAFTA region, including yarns and fabrics from China and other Asian suppliers.

U.S. textile industry: The textile industry contends China is a major beneficiary of the current NAFTA TPL mechanism, and it strongly pushed for its complete elimination in the USMCA.

U.S. apparel and retail industries: U.S. imports of textiles and apparel covered by the tariff preference level mechanism supply 13% of total U.S. textile and apparel imports from Canada and Mexico. Apparel producers assert that these exceptions give regional producers flexibility to use materials not widely produced in North America.

Viewpoints on other Provisions in USMCA

U.S. textile industry: The U.S. textile industry also opposes the USMCA newly allows visible lining fabric for tailored clothing could be sourced from China or other foreign suppliers, and it would permit up to 10% of a garment’s content, by weight, to come from outside the USMCA region (up from 7% in NAFTA1.0). The U.S. textile industry also welcomes that the USMCA would add specific textile verification and customs procedures aimed at preventing fraud and transshipment. Additionally, the U.S. textile industry is also pleased that the USMCA would end the Kissell Amendment. The Kissell Amendment is an exception in NAFTA that allows manufacturers from Canada and Mexico to qualify as “American” sources when Department of Homeland Security (DHS) buys textiles, clothing, and footwear using appropriated funds (about $30 million markets for textiles, clothing, and shoes altogether).

U.S. apparel and retail industries: Apparel importers are of concern that the USMCA continue to incorporate the existing NAFTA short supply procedure, which is extremely difficult to get a new item approved and added to the list, limiting their flexibility to source apparel with inputs from outside North America.

Finally, the report argues that “Regardless of whether the USMCA takes effect, the global competitiveness of U.S. textile producers and U.S.-headquartered apparel firms may depend more on their ability to compete against Asian producers than on the USMCA trade rules.” 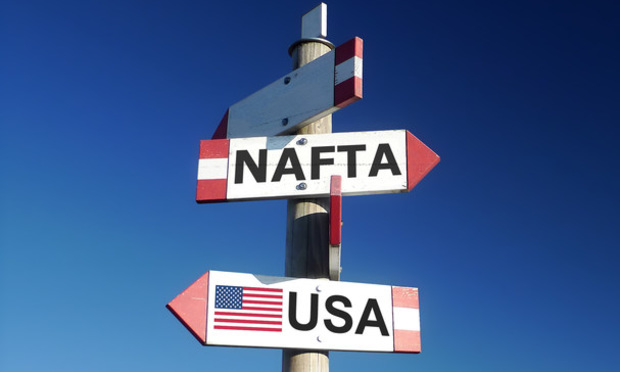 According to Inside US Trade, in the third round the NAFTA renegotiation (September 23-27, 2017), the United States has put forward several possible changes to the existing rules related to textile and apparel in the agreement:

USTR’s proposal to remove TPL in NAFTA has met strong opposition from the U.S. apparel industry, fashion retailers, and brands as well as their partners in Mexico and Canada. According to these industry groups:

A potential compromise could involve a reduction in Canadian and Mexican TPLs to the U.S. and an increase in the U.S. TPLs to Mexico and Canada, which could boost the U.S. trade surplus in textiles and apparel with its NAFTA partners and throw a bone to the U.S. textile industry by ostensibly incentivizing domestic production.

The TPL mechanism has played a critical role in facilitating the textile and apparel (T&A) trade and production collaboration between the United States and Canada, in particular, the export of Canada’s wool suits to the United States and the U.S. cotton or man-made fiber apparel to Canada. Statistics from the Office of Textiles and Apparel (OTEXA) show that in 2016 more than 70% of the value of Canada’s apparel exports to the United States under NAFTA utilized the TPL provision, including almost all wool apparel products. Over the same period, the TPL fulfillment rate for U.S. cotton or man-made fiber apparel exports to Canada reached 100%, suggesting a high utilization of the TPL mechanism by U.S. apparel firms too (Global Affairs Canada, 2017). Several studies argue that without the TPL mechanism, the U.S.-Canada bilateral T&A trade volume could be in much smaller scale (USITC, 2016). Notably, garments assembled in the United States and Canada often contained non-NAFTA originating textile inputs, which failed them to meet the “yarn-forward” rules of origin typically required for the preferential duty treatment under NAFTA.